Displaying Tolerance for the Wicked is Wrong

One of my many problems with evangelicals who support Trump (and other Republicans) is how they say they have to because they are their best chance to get what they want. No matter how wicked, how many sins they have committed, they side with them.

Look at support for Trump and Moore (Alabama). They are wicked, wicked people. Yet, they are supported. If a Democrat (or other liberal) was accused of 1% of what they have been, they would be pilloried. But these people blindly look beyond this.

My Jewish Study Bible has a footnote for 2 Chronicles 19:1-3 which expresses my thoughts about this:

Chronicles, however, takes the position that the mere act of displaying tolerance toward the wicked is wrong, since it countenances the Lord's enemies (see Ps. 139:21). Moreover, such tolerance and cooperation signals a lack of exclusive trust in the Lord and His ability to provide for one's every need.

You are either intolerant of sin completely or not at all! It shouldn't matter if the person is a man or woman, liberal or conservative, black or white, gay or straight. It's either right or wrong. End. Of. Story.
Posted by Unknown at 10:25 AM 3 comments:

Trump (and his supporters) need to all read Proverbs!

I've been reading through Proverbs, and today it seemed like every other couplet referred to Trump and his Cabinet and supporters. And that was just Proverbs 11 through 15!!

When arrogance appears, disgrace follows,
But wisdom is with those who are unassuming
(Proverbs 11:2)

A city is built up by the blessing of the upright,
But it is torn down by the speech of the wicked.
(Proverbs 11:11)

He who speaks contemptuously of his fellowman is devoid of sense;
A prudent man keeps his peace.
(Proverbs 11:12)

He who loves discipline loves knowledge;
He who spurns reproof is a brutish man.
(Proverbs 12:1)

The purposes of the righteous are justice,
The schemes of the wicked are deceit.
(Proverbs 12:5)

A man is commended according to his intelligence;
A twisted mind is held up to contempt.
(Proverbs 12:8)

A righteous man knows the needs of his beast,
But the compassion of the wicked is cruelty.
(Proverbs 12:10)

The way of a fool is right in his own eyes;
But the wise man accepts advice.
(Proverbs 12:15)

A fool's vexation is known at once,
But a clever man conceals his humiliation.
(Proverbs 12:16)

He who testifies faithfully tells the truth,
But a false witness, deceit.
(Proverbs 12:17)

Deceit is in the minds of those who plot evil;
For those who plan good there is joy.
(Proverbs 12:20)

He who guards his tongue preserves his life;
He who opens wide his lips, it is his ruin.
(Proverbs 13:3)

Arrogance yields nothing but strife,
Wisdom belongs to those who seek advice.
(Proverbs 13:10)

He who keeps company with the wise becomes wise;
But he who consorts with dullards comes to grief.
(Proverbs 13:20)

In the mouth of a fool is a rod of haughtiness,
But the lips of the wise protect them.
(Proverbs 14:3)

A scoffer seeks wisdom in vain,
But knowledge comes easily to the intelligent man.
(Proverbs 14:6)

A simple person believes anything,
A clever man ponders his course.
(Proverbs 14:15)

He who withholds what is due to the poor affronts his Maker;
He who shows pity for the needy honors Him.
(Proverbs 14:31)

The scoffer dislikes being reproved;
He will not resort to the wise.
(Proverbs 15:12)

He who spurns discipline hates himself;
He who heeds reproof gains understanding.
(Proverbs 15:32)
Posted by Unknown at 12:29 PM No comments:

One of my problems with evangelicals and their righteous attitudes is what they focus on as their Christian duty. They get all outraged by abortion, pre-marital sex, and gay marriage. These are things that are not big issues in the Bible. If at all.

But there are other things that the Lord does ask of us. Things that evangelicals either gloss over or are just hypocrites over. For instance, stewardship of the Earth. In Genesis 1:26, he places "dominion over the Earth" in man's hands. This does not mean despoiling. This is more like when you are asked to house sit for your grandparents. You can use the things in the house, but you don't trash the house.

While still reading the Jewish Study Bible, in Psalms 147, the footnote for verses 8 and 9 states "God created an ecologically harmonious world in which creatures are cared for (cf 104:10-16); the psalm stresses God's ongoing care for his creatures."

Ecologically harmonious. Ongoing care. I feel that so-called Christians and religious people need to re-read their Bibles and see what God (and Christ) are actually saying. Also, we must make our own minds up. I have learned that sometimes religious leaders in my church (as well as others) are not always in harmony with what I read. When that happens, I have to keep my own counsel and ask for the Lord's.

Bless our Earth. It needs all the protection it can get with us on it.
Posted by Unknown at 10:34 AM No comments:

Recorded in Your Book

In my study of the Old Testament using the excellent The Jewish Study Bible (I'm using the 1st edition), I'm up to Psalms 139 right now. The note for verse 16 stood out.

The phrase "recorded in Your book"refers, it says, to the book God showed to Adam. This is the book containing the list of all people ever to be born. What is really interesting is what they say about another interpretation of this. According to Ibn Ezra, "it is the blueprint according to which the person is formed."

Also according to this book, a common rabbinic tradition imagines that the Torah served as the divine blueprint during creation.

This means - according to my interpretation - that everyone of us carries this book within us. It's our DNA!!!! Very cool!!
Posted by Unknown at 10:10 AM No comments:

Is Everything Trump's Fault?

To democrats everything is trumps fault. When will they start taking ownership instead of blaming everyone around them.

Part of me laughed. As in, to conservatives, everything was Obama's fault. Remember, they never had their own health insurance plan. In fact, they complained that it was "rammed through" in an "undemocratic process". So, just how did they pass tax reform?

They never had their own answer to Sandy Hook. In fact, I've even written letters to my Representative asking if he can give me some concrete things they can do for gun violence. He never gives me examples of anything.

Republicans complained about the deficit. But what will the deficit look like after this tax "reform" goes through?

Then there's the other part. The part that groaned and wanting to slam my head against the wall. This person is someone I know and like personally. Yet, he has lived this past year in denial apparently. I can't believe he's a white supremacist. Just what is it? I don't see him as an evangelical fundamentalist who only cares about abortion and gays. I don't seem as hating the environment. Or to be against health reform. I don't see him as being an apologist for sexual assault and sexual harassment, either.

But it begs the question: Why?
Posted by Unknown at 9:59 AM No comments:

As hard as it is for me to accept people voted FOR Trump, it is even harder for me to accept that the same people that spoke out against Obama's so-called "imperial" Presidency are staying silent.

But there are some bright spots: 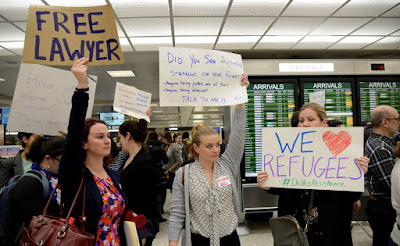 - US veterans knowing what they fought for (even if Trump supporters do not)
When Muslims got blocked at American airports, U.S. veterans rushed to help 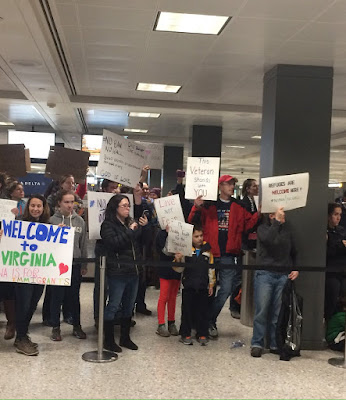 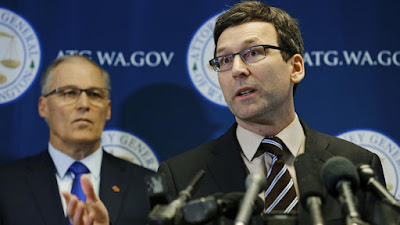 - Canadian PM Justin Trudeau, when speaking of the attack on the mosque, called it an "act of terrorism". Woo-hoo!! Way to call a spade a spade! When was the last time a white man murdering people was called an act of terrorism in THIS country?

And, finally, SHAME ON YOU, Trump Administration. How in the name of Jehovah can you issue a statement in remembrance of the Holocaust and not mention the Jews? Well, I suppose we should expect it when a Nazi like Bannon seems to be making the decisions.
President Bannon?
Posted by Unknown at 10:14 AM No comments:

If you're like me (and I know I am), Trump's America fills you with foreboding and dread. I am appalled that anyone - much less the amount of people that did - would support and vote for him. But what can I do? What can we do?

First, I think we need to educate people in just what is bothering us about this new President. Many of the people that did vote for him did not do so because they support his opinion of women, Muslims, etc.

So, one of the things I will be doing is passing on articles that speak to the things that disturb me the most.

For instance, Zephyr Teachout's excellent article in the February 13th issue of The Nation: Donald Trump Will Violate the Constitution on Day One

Second, I also want to pass on organizations where we can increase OUR influence by joining together with others with similar concerns.

The aforementioned issue of The Nation has highlighted several different organizations to consider.

Frances Fox Piven's suggestions
Throw Sand in the Gears of Everything

United We Dream: A youth-led organization that advocates on behalf of immigrant young people and their families, regardless of their immigration status.

350.org: Currently building a grassroots climate movement to keep carbon in the ground and hold governments accountable for cutting emissions. 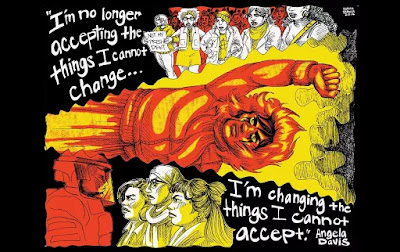 PEN: A worldwide association of poets, editors, and novelists that promotes the freedom to write, with local chapters across the United States.

City of Asylum: A Pittsburgh-based organization that provides sanctuary to endangered writers from around the world.

Alexia Foundation : An institution that funds and champions social-justice photojournalism.

Benjamin Barber's suggestions
In the Age of Donald Trump, the Resistance Will Be Localized

The Global Parliament of Mayors: An international body of mayors dedicated to working together to address global challenges.

Cities for Action: A coalition of cities dedicated to supporting immigrants and inclusive immigration policies 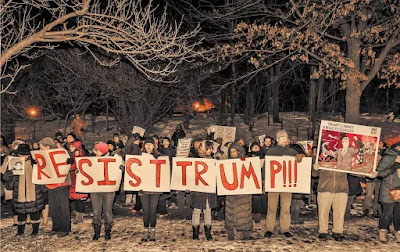 ACLU: For almost 100 years, the ACLU has defended our civil rights and liberties.

Planned Parenthood: The organization has provided health care and education to women for over 100 years.

Public Citizen: An organization that seeks to reduce corporate influence on government and hold government officials accountable for misdeeds.

MayDay.us: A grassroots movement to fight corruption by electing reformers to all levels of government.

Michael Massing's suggestions
How to Do Journalism in Trump’s America

Committee to Protect Journalists: CPJ safeguards press freedoms around the world, and as Meryl Streep noted, "We're going to need them going forward."

Center for Public Integrity: Winner of a Pulitzer Prize in 2014, CPI uses investigative journalism to expose corruption, abuses of power, and betrayals of the public trust.

In conclusion, I want to wish us all the best in the next few years. I do hope it will not be as bad as I think and imagine.

To Trump supporters: I am open to discussion. Please explain to me why you thought he was the better choice. I implore you to hold him to the same standard as you would to ANY holder of the office.

To those who voted but not for Trump: Please join me in working to keep his abuses in check.

To those who did not vote AT ALL: I am more disgusted with you than ANY other American. You are the reason we are in this mess.